Demi Lovato allegedly loves to party with booze and cocaine, a source reveals. 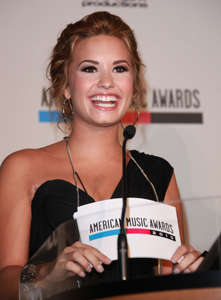 Disney teen queen Demi Lovato has other problems besides self-mutilation and an eating disorder — sources say she has a nasty drug and alcohol habit, too.

Eyewitnesses told Life & Style that Lovato has a penchant for booze and cocaine. College student Brian Payne told the mag that he partied with Demi in Texas last December and witnessed the singer/actress doing her best Hoover impression.

“She was doing line after line like a pro — and she was 17 at the time,” Payne said, recalling a party they attended after a Neon Indian concert at the Granada Theater in Dallas. “I just remember her doing it as if she had been doing it for a long time. It didn’t seem like something new to her.”

A different source told RadarOnline it was all caught on tape — and it could be Demi’s career ender.

That video, currently being shopped to media outlets, could rock the Disney child star’s reputation to the core.

Another insider said, “Demi’s been on a tear lately. She’ll chug booze straight from the bottle.”

“This is a young girl who got caught up in the fame and fortune of Hollywood and couldn’t see straight anymore,” says another insider. “She had eating issues and emotional issues, and everything else got hitched along with that.”

Demi is currently squirreled away in a rehab treatment center after an airport breakdown got her kicked off the Jonas Brothers tour.