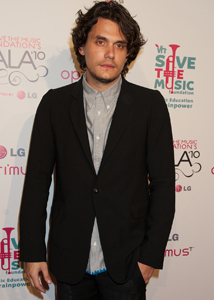 John Mayer may have found a new body to be his wonderland. Sources say the singer is having a steamy romance with a very married Giada De Laurentiis, and that the pair was caught snuggling at the Standard in New York.

An eyewitness said, “John had one hand on the small of her back. They looked like two people who were going to go home together.”

And it gets better: Another spy saw them disappearing into a suite at Hotel Gansevoort later that night!

Rumors of the affair between Mayer and De Laurentiis, who has been married for seven years to Anthropologie designer Todd Thompson, have been floating around since a blind item appeared last year many thought applied to them.

For her part, Giada admitted, “I was at the Standard that night.”

But she says she didn’t even see Mayer and there’s no hanky panky going on. “I’ve met him and he’s a great guy, but I just like his music. That’s all.”

read on for more john mayer