A box office payday isn’t the only sweet deal you get when you work with funnyman Adam Sandler. Sandler recently treated his Grown Ups costars to Maseratis.

We’ve all heard that working with Adam Sandler is a hoot. But Chris Rock, David Spade, Rob Schneider and Kevin James recently found out it also puts you in the driver’s seat — literally. The actor recently shelled out a lot of cash on Maseratis for each of his Grown Ups costars. “I went outside the other day and I had a new Maserati in the driveway,” Chris Rock told Howard Stern during an interview on his Sirius radio show. “Now I think that I’m Adam Sandler’s [expletive].” 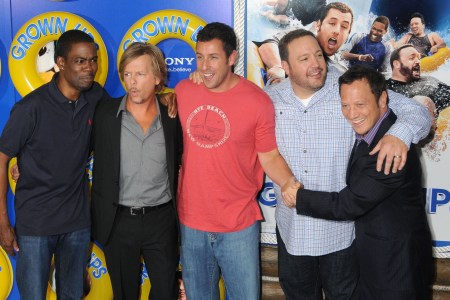 Chris Rock’s luxury Italian car cost Sandler $200,000. By the time Sandler got done playing Santa to his buddies, the actor dropped a whopping $800,000. “The movie’s like the biggest thing for Sandler,” Rock said. “He appreciates the help.”

Forbes recently ranked Adam Sandler number nine on their 2010 most overpaid actors list. The star’s movie Grown Ups cost $80 million to make and found box office success, bringing in $270 million. The actor has reason to spread the love, but then again Sandler has always been a good guy.

Cars seem to be the hot new Hollywood gift of choice. Khloe Kardashian presented her husband, Lamar Odom, with a vintage $400,000 Rolls Royce when he and the Lakers snagged the NBA championship. Not to be outdone, who could forget when Usher reportedly gave his protege, 16-year-old Justin Bieber, the keys to a brand new Range Rover? Oh, to be a receiver on the end of a star’s gift giving spree.

If you could snag a car from Adam Sandler, what kind would you want? Tell SheKnows, we want to know.