MTV has been subpoenaed for the full-length video of Amber Portwood beating up her ex-fiance on Teen Mom. 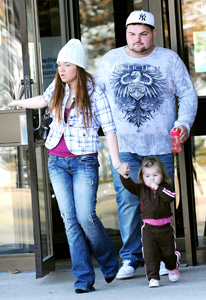 Teen Mom star Amber Portwood has been in hot water ever since an episode aired showing her punching and slapping ex-fiance Gary Shirley during an obscenity-filled fight. Now cops want to see the entire, unedited scene.

Police filed a subpoena requesting “any and all records reference raw television or video media footage regarding the MTV production(s) of Teen Mom which depict all or potentially all physically violent encounters between Amber Portwood and Gary Shirley, in addition to any raw footage of the Reunion Shows in [which] Portwood and Shirley discuss any such violent encounters on the show Teen Mom, either aired or unaired.”

Because of the assault in the September episode, Indiana’s child protective services is monitoring Amber for six months. To date they have received over 300 calls about Amber due to the show.

Portman and Shirley are no strangers to the local sheriff’s department. Most recently they visited at the end of October when Amber claimed Gary pushed her outside in her underwear. Gary said he only did it to protect himself from getting the stuffing beat out of him again.