It was instant dance week on Dancing With the Stars, but it was also time to send another contestant packing. The DWTS semifinals were decided as Kurt Warner was left out in the cold and sent packing. 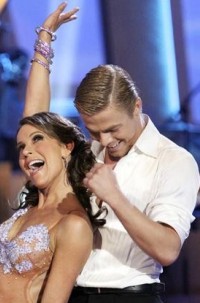 Jennifer Grey and Brandy sat tied on top of the Dancing With the Stars leader board last night as instant dance night proved no problem for the competitors. As five hopefuls became four on the live results show it was a slim margin in the race for the mirrorball trophy.

Dancing with the Stars: The results

The results show opened with an encore of last night’s most popular and feel-good dance of the evening — Kyle Massey and Lacey Schwimmer’s instant jive. But it was down to business as usual once the two caught their breath. The spunky couple was sent safely on as the first contestants to make it into the semifinals.

Taio Cruz pumped the crowd up with his smash hit Dynamite and John Legend brought them to their feet.

The next couple sent on to the semifinals was Jennifer Grey and Derek Hough who were put up against Kurt Warner and Anna Trebunskaya. It was tough to see Kurt and Anna head to jeopardy land. They were good last night, but it’s all about the votes.

Before being sent out to discover their fate against Bristol Palin and Mark Ballas, Maks Chmerkovskiy and Brandy addressed the conflict between Maks and Carrie Ann Inaba from last night’s show. The judge grilled Maks for not starting the routine earlier and he was not happy Brandy got docked for Carrie Ann’s opinion on his choice in choreography. Despite his unhappiness, Maks apologized for bringing drama into the ballroom, but it wasn’t enough to save him and Brandy from jeopardy. Bristol Palin and Mark Ballas moved one step closer to the mirrorball trophy.

Kurt Warner and Anna Trebunskaya stood tall against Brandy and Maks Chmerkovskiy in the bottom two. In the end, there was only one spot left in the semifinals and it belonged to Brandy and Maks. 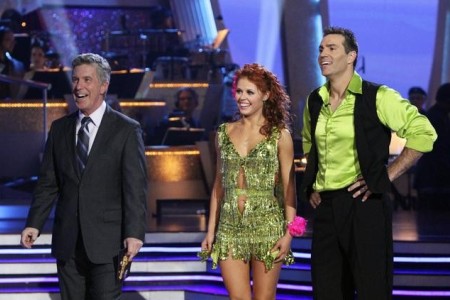 The semifinals of Dancing With the Stars are set to showcase Jennifer Grey, Kyle Massey, Bristol Palin and Brandy. We want to know who you think will make it all the way.