Madonna made an appearance on Ellen — via satellite — to discuss bullying and the number of gay teens who have recently committed suicide.

Madonna took to The Ellen DeGeneres Show to discuss her sadness over the number of teen suicides, saying she felt like she had to say something. 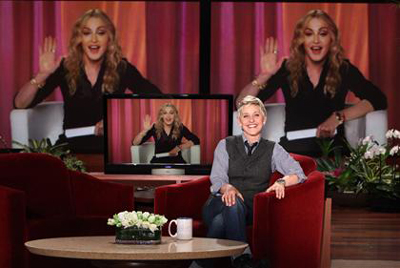 “I’m incredibly disturbed and saddened by the overwhelming number of teen suicides that have been reported lately because of bullying,” Madonna told Ellen. “The gay community has been incredibly supportive of me. I wouldn’t have a career if it weren’t for the gay community.”

Madonna opens up about her childhood

Madonna said she felt alone as a teen and could “totally relate to the idea of feeling isolated and alienated.”

“I was incredibly lonely as a child, as a teenager. I have to say I never felt like I fit in school. I wasn’t a jock. I wasn’t an intellectual. There was no group that I felt a part of. I just felt like a weirdo.”

Madonna on a rampage

Madge went on to tell Ellen DeGeneres that “we are torturing teenagers because they are gay.”

“It’s unfathomable. It’s like lynching black people or Hitler exterminating Jews. Sorry if I’m going on a rampage right now but this is America. The land of the free and the home of the brave.”

read on for More Madonna

Is Madonna dating her dancer?
Glee tributes Madonna
Madonna hates everyone in 1991 letter