The debut of Conan O’Brien’s new show was a smashing success. The ratings for Conan blew away the big network competition by a long shot. Can Conan keep up the pace? 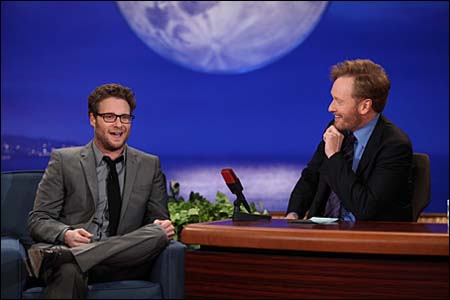 The huge audience for Conan beat his late night talk show foes, by a long shot. By comparison, The Tonight Show with Jay Leno posted 3.5 million viewers Monday with 952,000 in the 18-49 age bracket and The Late Show with David Letterman drew 3.4 million with 1.3 million between 18-49. He also beat his cable counterparts The Daily Show with Jon Stewart by 3 million viewers and Stephen Colbert’s The Colbert Report by 3.2 million.

What does this mean? For starters, these huge numbers prove that O’Brien has the power to beat out the other late night talk shows. Many critics said there was no way Conan could attract more viewers than network programs, even on his debut show. Instead, last night’s show ranked Conan as the number one late night talk show broadcast of all time on cable, beating Jon Stewart’s Oct. 29, 2008 episode of The Daily Show.

Last night’s show proved that the enormous outpouring of support for O’Brien hasn’t waned in the eight months since leaving The Tonight Show. Will he be able to keep up these huge numbers? Time will tell. One thing’s for sure: we’re happy to see Conan back on late night!