Conan O’Brien made his TBS debut with the highly anticipated, Conan. Did O’Brien’s trademark wit and humor shine through? We think Conan will be a late-night force to be reckoned with.

Last night, Conan O’Brien fit right back into his late-night desk after leaving his post at The Tonight Show back in January. O’Brien might have been absent from the talk show circuit for nearly 10 months but from the looks of it, Coco is dusted off and ready to go. 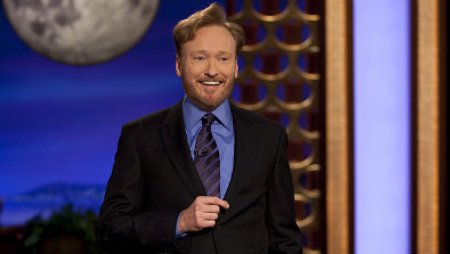 “Thank you and welcome to my 2nd annual first show. Yes, I know what you guys are thinking, ‘Hey, it’s the guy from Twitter,'” Conan O’Brien added, referring to his oddball tweets over his absence.

Of course, O’Brien couldn’t open Conan without taking potshots at his shift from network TV to basic cable.

“This is an exciting night. I’m glad to be on cable. The truth is, I’ve dreamed of being a talk show host on basic cable ever since I was 46,” he deadpanned to laughs.

The moment we knew was coming wasn’t lost either. The comedian weighed in on his former home, NBC.

“I’m going to be honest: It’s not easy doing a late-night show on a channel without a lot of money and that viewers have trouble finding. So that’s why I left NBC,” he joked.

O’Brien added, “The weird thing is this: I put myself and my staff through a lot because I refused to go on at midnight. So, I get this job at 11. Then, yesterday, Daylight Savings Time ended, so right now it’s basically midnight. In fact, it’s 12:05.”

The Conan set was a comfortable space for guests to kick-up their heels and have a chat. There was one interactive addition —  a full moon operated by remote control — that could get pretty fun.

Conan O’Brien’s first celebrity guest was none other than Seth Rogen, who not only confirmed his engagement to longtime girlfriend Lauren Miller, but also told the awkward tale of his proposal. The story involved a half-naked Miller, a closet and a ring. The star also got pretty loose-lipped over his views on legalizing marijuana.

The host then gave a warm welcome to Glee’s Lea Michele, who was a good sport as O’Brien playfully grilled her on the recent GQ magazine racy photo shoot. Conan O’Brien came up with a solution to making the photos a bit more acceptable — place a shot of him from high school beside her in the layout.

As they got down to the good stuff something fell from behind the stage interrupting the interview. “Basic cable,” O’Brien laughed. “There’s a Meineke muffler shop right behind us.”

Conan O’Brien is taking his move in strides and making the best of it. It’s classic Conan doing what he does best — making fun of a bad situation — and turning it into his success.

What did you think of Conan O’Brien’s Conan?

Read on for more Conan O’Brien