Shannen Doherty’s father and her Dancing With the Stars inspiration, John Thomas Doherty, has died. 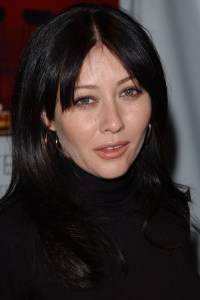 Shannen Doherty is honoring the man who gave her the courage to compete on last season’s Dancing With the Stars — her father.

The actress and often misunderstood starlet confirmed the devastating news that her 66-year-old father, John Thomas Doherty, died November 5 after a battle with numerous “health issues.”

Doherty released a heartfelt statement through her publicist, reflecting on her feelings toward her father. Shannen Doherty affectionately labeled John Thomas Doherty as the “greatest man in the world,” adding, “I love him with every inch of my being and cannot imagine life without him.”

Doherty took on last season’s Dancing With the Stars for her father who had suffered a stroke. Even though Shannen Doherty was sent home after the first week she still considered it a triumphant showing because her father was able to sit in the audience and watch. At the time of her elimination, she proudly said, “I did it for my dad.”

Condolences go out to Shannen Doherty?? and her family during this sad time. ???????