At the BAFTA/LA’s Brittania Awards, where Betty White was honored over the weekend, Jane Lynch, who plays the delightfully manipulative schemester Sue Sylvester on Fox’s smash hit, Glee, let some Glee scoops out of the bag. 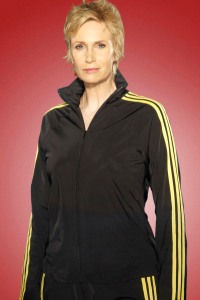 If you want to be surprised as you watch this season unfold, don’t read any further! But if you need a little Gleek fix, especially considering there hasn’t been an episode since Halloween’s Rocky Horror blow-out, we’ve got what you’re jonesing for.

Are you ready for this?

Lynch says to expect wedding bells in the next three or four episodes. Say what? But who’s walking down the aisle?

Could it be Mister Schue (Matthew Morrison) and Emma (Jayma Mays)? Or, better yet, Emma and her foxy new dentist boyfriend (John Stamos)? Are Kurt’s dad and Finn’s mom making it official?

Glee producers have hinted at more time spent on the relationship between Santana (Naya Rivera) and Brittany (Heather Morris), are they off to Hawaii for a commitment ceremony?

“Sue gets married — that’s all I’m going to tell you,” Lynch told People, before back-peddling and adding, “I probably shouldn’t have said anything!”

We’re not entirely sure we buy it, but when she added that the event wouldn’t be “a big musical blow-out,” we realized she was probably telling the truth.

No word on who will be kissing the bride, but, in our dream of dreams, it’ll be Sue marrying Will’s former arch-enemy, the always brilliant Neil Patrick Harris who won an Emmy for his guest starring role in our favorite episode of last season, one that featured a duet battle version of Dream On at a Les Mis audition. Fingers crossed!

Lynch also talked about Gwyneth Paltrow’s upcoming guest appearance. To date, the only thing we knew was she would be singing the clean Forget You version of Cee Lo’s hyper catchy new jam. But Jane also explained that Gwynnie, who leads the cast in a mash-up of Singing in the Rain and Umbrella, will play a substitute teacher brought in to cover for Will after he gets “the monkey flu” thanks to Sue.

“I expose him to it,” Lynch said. “I turn a sneezing kid on him so that he gets the monkey flu.”

And that is why we love the way Sue sees it.