Harry Potter star Daniel Radcliffe and House‘s Hugh Laurie got animated for laughs in The Simpsons‘ Treehouse of Horror XXI. Radcliffe and Lisa spoofed Twilight‘s epic romance in Tweenlight, while Laurie spoofed Dead Calm with Homer and Marge in Master and Cadaver. 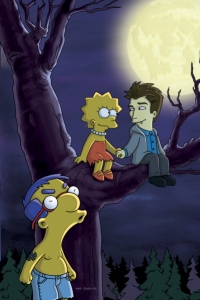 While Kristen Stewart and Robert Pattinson have hit Brazil to film the infamous Breaking Dawn honeymoon scenes, everyone Stateside is talking about last night’s spoof of their Twilight romance on The Simpsons.

Daniel Radcliffe took a break from Hogwarts magic to take a crack at epic romance as a Pattinson-Edward-inspired vamp (Edmund) who only has eyes for Lisa, making Lisa take on the Stewart-Bella role in the love story.

“They are allowing me to fulfill a dream,” longtime Simpsons fan Radcliffe said. “This is pretty much the culmination of my life. This is what I’ve been aiming towards.”

In line with the Twilight tale, a fanged Edmund woos Lisa by saving her from the careening Springfield school bus and taking her for a fun romp through the forest.

“Let us move between the trees the way a bat does…by jumping,” Radcliffe’s Edmund said before whisking Lisa away.

The spoof veers from the original tale in quite a few spots, as spoofs should. Most importantly, Lisa decides she doesn’t want to spend eternity as an 8-year-old vampire, no matter how dashing he is. Also, Edmund’s competition, Moorehouse, turns into a poodle instead of a fierce wolf.

Edmund’s Count Dracula father is also yards away from the real Cullen patriarch. “They say vampires live forever, but I die from embarrassment every day,” Edmund said of his dad.

The “unholy dreamboat” and his father also feed on Flanders and then attack Homer when he throws himself in front of Lisa. Homer’s high cholesterol blood saves the day by taking the vamps down, but he’s also left as a vampire.

In another segment of The Simpsons’ Treehouse of Horror XXI, Hugh Laurie dumped House’s American accent for a role that was even darker than the grumbling doc. In a spoof of the screamfest Dead Calm, he played a deadly castaway who put a damper on Marge and Homer’s second honeymoon.

“I’m a rather sinister character and I get just comeuppance: I die,” Laurie said. “I’ve loved this show since it started.”

The Simpsons‘ next big visitor is Katy Perry, who brings the animated show into the world of live action as Moe’s girlfriend in the December 5 episode, The Fight before Christmas, which also stars Martha Stewart. This year also saw a visit from Glee‘s Lea Michele, Cory Monteith and Amber Riley back in September and Ricky Gervais gets into the fun early next year.

Meanwhile, Daniel Radcliffe assumes his rightful role in the final battle against Voldemort on November 19, when Harry Potter and the Deathly Hallows: Part I hits theaters.

Daniel Radcliffe on The Simpsons