Kristen Stewart and Robert Pattinson have landed in Brazil for the filming of The Twilight Saga: Breaking Dawn‘s honeymoon scenes. Check out this steamy picture of Stewart and Pattinson kissing on the set!

Here’s the scoop: Kristen Stewart and Robert Pattinson landed in Brazil to film the famous honeymoon scenes on the Isle Esme from the highly anticipated Breaking Dawn. I’m sure photographers will be staking out the set, hoping to get some shots of Bella and Edward in the skinny dip scene! Check out these steamy photos of the couple on-set in Brazil. 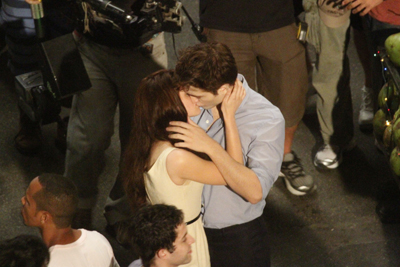 Reports are saying that the couple was spotted boarding a public airplane to Rio de Janeiro, with Stewart dressed in jeans and her usual black zip-up hoodie and Pattinson wearing baggy pants, a baseball cap and sunglasses. No word if the maybe-couple was spotted canoodling on the airplane. 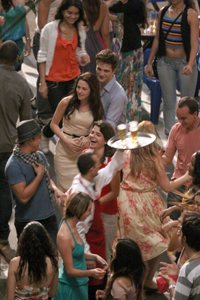 They are set to film Breaking Dawn in this location for less than a week, with a helicopter shuttling the couple to the set from their hotel each day.

The cast has been in Baton Rouge, Louisiana filming — and fans have caught the cast, including Pattinson and Stewart, along with Ashley Greene and Kellan Lutz, working out at Bally Total Fitness.

“They’ve been in here some,” a source said. “But we don’t like to talk about it much because so many fans come and hang around waiting to see them, some are crying with posters and stuff.”

read on for More Breaking Dawn