Lindsay Lohan wants to open her own rehab centers and is in the midst of a reconciliation with her father, says mom Dina Lohan. 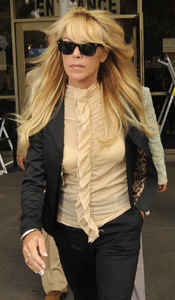 Lindsay Lohan is in the middle of a long stay at the Betty Ford Center — a sensitive time for anyone — but that hasn’t stopped her fame-grubbing mother from giving interviews to anyone who will listen to drum up publicity for her daughter.

Dina Lohan’s latest chat was with Matt Lauer on Today, who asked Dina if she thinks rehab — where Lindsay has been five times before — will stick this time.

“We take it one day at a time,” Dina said. “Addiction is difficult, I don’t have a crystal ball. I pray hard.”

The last time Dina talked with Matt Lauer, she tensely denied Lindsay was an addict. Now she says she only said that because it was Lindsay’s story to tell, not hers.

She then revealed that Lindsay “wants to start her own facilities, help other children.” Obviously a few weeks of rehab makes someone an expert at recovery. Linds might want to focus on her own mental health before dealing with that of other people.

Interestingly, the person upon whom Lindsay heaps much of the blame for her unhappiness — perhaps rightfully so — is the person she is currently holed up with in therapy. Michael Lohan, who has been trying to get in to the Betty to talk with Lindsay for weeks, was finally admitted and the pair is talking for the first time in seven months.

“It was an emotional reunion,” a source told RadarOnline. “There were hugs, kisses and even a few tears when Michael and Lindsay first saw each other.”

Michael reminded reporters of his new pledge not to comment on Lindsay then commented anyway. “I have pledged not to comment about anything relating to my daughter.”

“However, what I will say is that I am an incredibly proud father tonight. My daughter is progressing extraordinarily well.”

Dina and Michael make no bones about hating each other — Dina has a restraining order against him — but Lindsay’s mom went the politically correct route for once and was gracious about the reunion.

“I am here for Lindsay and whatever will make her heal and make her feel better,” Dina said.

Lindsay is scheduled to stay in the Betty through January 3.