Eric Roberts says Kate Gosselin is a child-abusing monster who siphons money from her kids and is using them for fame. 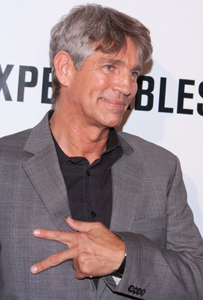 Actor Eric Roberts — brother to Julia Roberts and dad to Emma Roberts — recently wrote on Twitter that he thinks Kate Gosselin is a child abuser.

“I know she’s fading from the news, but hopefully someone’s still got their eye on the wellbeing[sic] of her kids. Kate Gosselin is a child abuser,” Roberts wrote on November 1.

Last year a former staffer alleged that Kate screams at her brood of eight and spanks them regularly — in fact, Kate was caught by paparazzi spanking her daughter Leah outside their home, an act Kate does not feel warrants an apology.

“Whether the paparazzi are there or not, I am a mother first,” Kate said in a statement. “I love my children and when they misbehave, I discipline them as I deem appropriate for the situation.”

Roberts expanded on his Twitter opinion in an interview with Small Town Gosselins. He said, “Thank goodness there is footage of Gosselin hitting her kids, and apparently feeling fine about it. I say thank goodness, because behind closed doors makes it that much tougher to stop.”

Roberts also commented on the money situation. TLC has reportedly made over $200 million on Jon and Kate Plus Eight and its various incarnations. Did you know (according to TV Guide) Kate Gosselin makes $250,000 per episode, and the kids split a mere 15-percent of that eight ways? That means each kid gets a mere 1.875-percent of the income from the show.

“The number of kids Kate and Jon have are the reason Kate and John have money,” Roberts said. “It would be awful if financial stress was added to those kids’ problems. But the money should be divided 10 ways.”

“The kids could have a great time doing the show if their mom wasn’t a cruel horror who is clearly repeating generational abuse.”

read on for more kate gosselin