Dancing With the Stars pro Karina Smirnoff will soon be dancing down the aisle. Smirnoff’s boyfriend, Brad Penny, has asked for her hand in marriage. 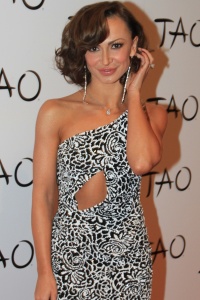 Karina Smirnoff has another spectacular routine to choreograph and it’s close to her own heart — her wedding.

The professional dancer and Dancing With the Stars favorite is engaged to boyfriend Brad Penny, according to UsMagazine.com — and has been since October 4!

Smirnoff was caught flashing her new accessory, an engagement ring, at the fifth anniversary party for Tao in Las Vegas on November 6. The exquisite rock the dancing beauty is now publicly sporting is a 4.5 carat Asscher Cut diamond.

Karina Smirnoff spilled the beans as to just how memorable Brad Penny made the moment. The baseball player popped the question after Smirnoff finished performing her futuristic foxtrot with Mike “The Situation” Sorrentino.

Smirnoff told a tale of how her manager convinced her that the president of Twitter wanted to have a dinner meeting with her directly after she finished taping the evening’s DWTS episode. Still wearing her black lipstick and sky-high hair from the performance, the dancer rushed out for the bogus meeting.

“I was in the middle of the show and had no clue what was cooking behind my back,” Smirnoff explained. “The dinner meeting was set up at a restaurant in Malibu. When [my manager and I] got there, it was completely empty. She excused herself to take a call and while I was sitting there alone, Brad came in.”

Smirnoff added, “I had crazy hair and black lipstick on and was just concerned about looking like the Bride of Frankenstein. Even after Brad got down to one knee and opened the box with the ring, it still didn’t register.”

So, why did the couple wait so long to break the news? It’s all about the family. “We kept it quiet because my family is in New York and Brad’s family is in Oklahoma,” Smirnoff revealed. “So we kind of wanted them to come out and celebrate and be a family first before we let the cat out of the bag.”

Karina Smirnoff and her baseball player fiance announced they were dating not long after she split with her Dancing With the Stars costar, Maksim Chmerkovskiy, in 2009.

“I’m the happiest I’ve ever been and Brad is the sole reason for that,” Smirnoff told UsMagazine.com.

Congrats to the happy couple. It will be interesting to see if they replace the wedding march with a strategically danced waltz down the aisle.