As Gwyneth Paltrow gets set to make her Glee debut November 16, more details about the star’s show-stopping numbers are coming forth, including a fabulous mashup of Umbrella and Singing in the Rain.

What do you get when you pair a top-rated show and a Hollywood mega-star? A Glee and Gwyneth Paltrow marriage made in music heaven. 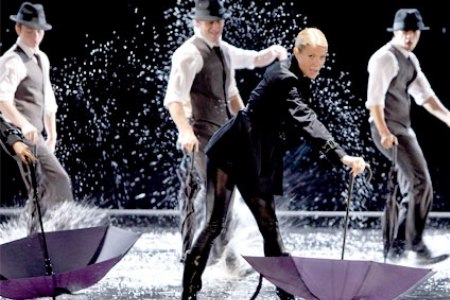 On November 16, Glee will once again add to its list of celebrity guest stars with the addition of the fabulously talented Gwyneth Paltrow. Who can forget her days of singing in the movie Duets?

As Paltrow’s Glee episode draws nearer, fans are chomping at the bit to know just what the musically gifted, Oscar-winning actress will belt out.

It was recently reported that Gwyn would channel her inner Cee Lo Green and take on his bleep-heavy track, F**k You — with a few minor changes to appease the censors, of course. That means renaming it Forget You and making her spotlight-stealing scene TV friendly. 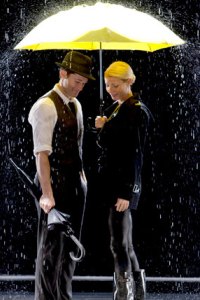 Just as the dust was settling on that nibblet of information, another song selection for Paltrow’s Glee episode was revealed. Get ready because this is stellar! Gwyneth Paltrow will follow in the Glee footsteps of exciting mashups. She’ll combine the awesomeness of Rihanna’s Umbrella with the smoothness of the classic Singing in the Rain to form the perfect mashup.

If anyone can make Umbrella and Singing in the Rain a successful mashup, it’s Gwyneth Paltrow.

With a huge couple of weeks ahead for Paltrow she must be busting with glee. On November 10, she’ll make her live singing debut when she performs Country Strong, from her new movie, Country Strong, at the CMA awards.

What are you more excited to see? Country Strong the movie, the CMAs or Paltrow’s Glee episode?