Topless photos of actress Kat Dennings leaked on the internet Friday. Will these photos help or hurt her burgeoning career? 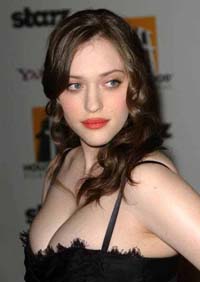 Apparently Kat Dennings hasn’t learned this lesson from other Hollywood stars — don’t take self-portraits featuring you sans clothes because it will end up on the Internet. Something tells us she’s learning that lesson now.

The incredibly NSFW website FleshBot leaked some photos of the Nick and Nora’s Infinite Playlist actress showing off her chest. The photos look like camera phone shots, so it’s likely she only intended for a suitor. Instead, the entire internet is abuzz with her assets.

Some industry insiders are hypothesizing that Denning’s leaked sexting photos are a way to drum up publicity for her upcoming movie Daydream Nation. In the film Dennings plays a girl who gets caught up in a bloody love triangle with a teacher and a mysterious new boy, according to The Hollywood Reporter.

Is it true? Crazier things have happened in Hollywood, especially with actresses desperate to up their star power. Who knows if Dennings falls into that group, but her name is now on many teen boys’ hot lists now.

Will topless photos ruin her career?

Not likely. Topless photos and sex tapes boosted the careers of plenty of stars, including Kim Kardashian, Pamela Anderson and Paris Hilton, to name just a few. If anything, she’ll get more roles and attention as a result of the photos.

Hey Kat Dennings — why not get paid for your topless photos by posing for Playboy? Just a thought.