Despite their Halloween tricks, a source says LeAnn Rimes and Eddie Cibrian really are engaged. 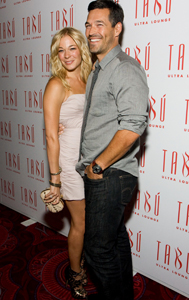 LeAnn Rimes and Eddie Cibrian may have been joking with their fake Halloween proposal picture, but a source close to the couple says that although it didn’t happen that day, the couple actually is engaged.

The source told E! Online that LeAnn and Eddie definitely are engaged and that’s why Eddie’s scorned ex-wife Brandi Glanville wants to have a sit-down with the woman that caused her heartbreak.

While appearing on The Talk, Glanville told Sharon Osbourne, Leah Remini and Julie Chen that she and Rimes are finally “going to go and sit down and talk.”

Of course, she also made it abundantly clear that she was totally blindsided by Eddie’s inexcusable infidelity.

“I did believe I had a great marriage. My marriage — in my head — was not in trouble.”

Glanville was arrested last week on DUI charges and subtly faulted Cibrian and Rimes for that, too.

“I’m used to having my kids all the time,” she explained. “Now I have them part-time. I don’t have a nanny. I don’t have help. When they’re gone, I’m alone.” So she drinks a few glasses of wine to deal with it.

“I don’t think I have a drinking problem. I think I had a problem the other night when I made a bad choice to drive.”

By the way, LeAnn made the most hilarious comment on Twitter today. In response to a comment about Brandi, LeAnn wrote, “I’ve always respected her and think they have a beautiful family.” You know, inasmuch as you can respect someone and steal their husband at the same time.