Storm Chasers star Matt Hughes passed away in May. Now, his cause of death is revealed in a Discovery Channel statement. 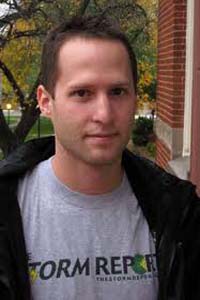 He lived a dangerous life, but storm chasing wasn’t what killed him.

Storm Chasers star and meteorologist Matt Hughes, 30, passed away on May 26 from complications of a suicide attempt, according to a statement by the Discovery Channel.

The surprise announcement came at the end of Wednesday’s episode of Storm Chasers. The episode — titled Dedication — was the highlight of the meteorologist’s stint on the show. He was the one in charge during the biggest tornado chase of his career.

“Everyone involved in Storm Chasers mourn[s] the loss of their friend and colleague,” the network said in a statement. “Our thoughts and prayers are with Matt’s family, and we ask fans to kindly respect their privacy.”

Hughes’ death came two weeks after he was found hanging in his Wichita, Kans. home, according to E! Online. He reportedly battled depression for several years.

EMTs successfully resuscitated the reality star, but he later died at the hospital. His funeral drew 500 people, according to friend and colleague Aaron Blaser.

Hughes is survived by his wife, Kendra, and sons Collin and Hunter. The Discovery Channel has set up a fun to help support his family, according to E!