Michael Jackson is Immortal, at least according to the new Cirque du Soleil posters. 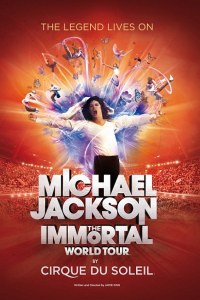 Standing with his arms outstretched, a packed arena as the backdrop, his white shirt blowing in the wind-fan, you can almost hear Michael Jackson’s trademark “Yee-hee” as tumblers and clowns explode above him like thought bubbles under the words, “The Legend Lives On.”

The poster is for the 27-city tour, titled Michael Jackson: The Immortal World Tour, which kicks off in Montreal on October 2, 2011, and will run through 2012 before taking up residence at the MGM Mirage in Las Vegas.

In April, Cirque announced their intention to create a Michael Jackson-themed show, prompting Papa Joe Jackson, to express his displeasure with said plans. Apparently, the show was approved by Michael’s mother and the overseer of his estate, Katherine Jackson.

At the time, Katherine released a statement saying, “Our family is thrilled that Cirque du Soleil will pay tribute to my son in such an important way.”

If you ask us, he’s just bitter he won’t be cashing any of those big cushy Cirque checks (the profits from the show are split 50-50 between Jackson’s estate and the circus).

Regardless of Joe Jackson’s displeasure, the show has gone on, directed by Jamie King, not the model-turned-actress, but the man who was Madonna’s creative director for the last 12 years and has staged concerts for Britney Spears, the Spice Girls and the only Canadian treasure more revered than Cirque, Celine Dion. Similar to Cirque’s other tribute shows, Love, an homage to the Beatles, and Viva Elvis, the Immortal tour combines Michael Jackson’s greatest hits and choreography with Cirque’s unique acrobatics.

So get ready for the most amazing Moonwalking you’ve ever seen! Tickets for the Michael Jackson Cirque du Soleil tour go on sale Saturday.