Taking one more step down their road to utter world domination, the Kardashian sisters inaugurated Dash NYC, the first Manhattan outpost of the family clothing store so heavily pimped on their E! reality show Keeping Up with the Kardashians. 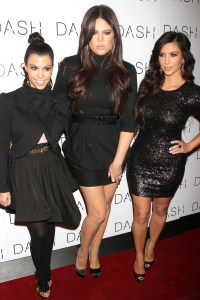 Opening the second Dash, which started in Calabasas, was at the center of Kourtney and Khloe Take Miami, so, naturally, the new SoHo boutique had to be immortalized in yet another E! docu-soap, Kourtney and Kim Take New York.

The burgeoning clothing and accessory store has been criticized and suspected as a front for the girls’ reality empire because the Miami location is reportedly rarely open and none of the sisters can ever be found on the premises, unless they’re filming.

Not that that keeps fans away.

At the official New York opening, NYPD had to be called in to help control the hundreds of fans who showed up for a glimpse of Kim, Kourtney and Khloe, issuing several summonses for disorderly conduct.

And an opening party isn’t a regular (or real) workday, so, of course, Kourtney, Kim and Khloe (who looked pretty miserable in every photo taken at the event) were front and center at the store on Tuesday, posing and preening for the cameras.