Nick Lachey and Vanessa Minnillo are getting hitched! Lachey is ready to take the marriage plunge again after his last marriage to Jessica Simpson fizzled in divorce. 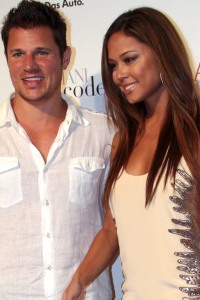 Looks like Jessica Simpson’s ex will be heading to the altar soon. Nick Lachey and Vanessa Minnillo are engaged to be married!

The couple, who began dating in 2006, gushed about the news in the following statement: “We’re excited and incredibly happy about our engagement and we look forward to a wonderful future together.”

Nick Lachey has had a run of better luck in the love department compared to his ex-wife Jessica Simpson, even though his relationship with Vanessa Minnillo has not always been the smoothest.

The couple, who also double as TV personalities (he is the host of Sing-Off and she is the host of True Beauty), called it quits for a short period in 2009. Nick Lachey and Vanessa Minnillo rekindled their love after the cooling-off period, however, and now have a wedding to plan.

Recently, Minnillo opened up to Parade about her romance with Nick Lachey and the importance of communication in a healthy relationship.

“You have to talk through everything,” Minnillo said. “We talk daily about things that upset us. It’s about having a sounding board because if you hold in all your thoughts, dreams, anger and anxiety then you’re only hurting yourself.”

Just because Lachey put a ring on it, don’t look for a reality show featuring the couple anytime soon. There won’t be any repeats similar to Nick Lachey and Jessica Simpson’s MTV reality show, Newlyweds: Nick and Jessica.

Sounds like Nick Lachey and Vanessa Minnillo will have one more thing to celebrate other than their shared November 9 birthdays.