An arrest warrant has been issued for Gary Collins in a reported hit-and-run. 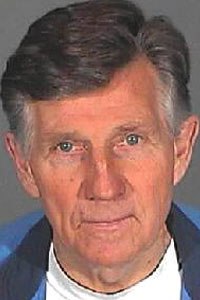 Collins is a TV star whose onscreen presence was ubiquitous for anyone born before the first Bush took office. He was on all the 1980s TV shows like, Hawaii Five-O, The Six Million Dollar Man, The Love Boat, Charlie’s Angels and Perry Mason. He also won an Emmy for his talk show, Hour Magazine, has a star on the Hollywood Walk of Fame and hosted the Miss America pageant from 1982-1991, before Regis Philbin took over.

But now he’s getting attention for a very different reason.

According to reports, Collins’ Jeep rear-ended a Ford Focus at a stop light on Tuesday afternoon in Jackson, Mississippi. No biggie, except that after the 72-year-old actor exchanged information with the other driver whose rear he tapped, he left the scene before police got there, saying the cops were taking too long.

Police officers went to Collins’ house and wrote him a ticket for his lack of patience and the whole thing could have been over, but now the other driver has decided to press charges against Collins for fleeing the scene.

Now the poor guy has a warrant out for his arrest. Collins’ attorney says his client expects to face a misdemeanor charge, which, despite how it sounds, is about as bad as getting a traffic violation for rolling through a stop sign, but the whole thing has whipped sites like TMZ into a frenzy because Collins has racked up three DUIs in the last eight years.

He was first arrested in 2002, then again in 2007, when he was sentenced to four days in jail and received four years probation, and again in 2009, while driving a motor home. That final time, Collins pleaded no contest to misdemeanor driving under the influence and was sentenced to 120 days of house arrest, which is both perfect and hilarious considering what he was cruising in when he got pinched.

According to police officers, there is no indication that Collins was under the influence when he hit the other vehicle.