Robert Downey Jr and Zach Galifianakis combine forces in Due Date and sat down recently to discuss the buddy, road-trip comedy. Due Date features Downey as Peter Highman, a Los Angeles businessman who is trying to get home from Atlanta in time for the birth of his first child. He’s cruising towards that life goal until he runs into Galifianakis’ Ethan Tremblay.

Hilarity does ensue (don’t miss our review November 5) and more importantly, the Due Date story is told with equal parts bravado humor and bromance sensitivity. 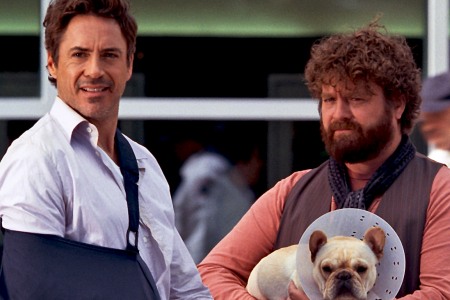 Downey and Galifianakis dish Due Date, the controversy over Downey’s spitting on Galifianakis’ dog and whether the film’s storyline has any footing in the real life relationship between director Todd Phillips and Zach Galifianakis.

SheKnows: Was part of the appeal of this film your chance to portray a regular guy as opposed to the franchise characters you’re working on from Sherlock Holmes to Iron Man?

Robert Downey Jr: I just want to be a part of a good movie and I can’t stand to be surrounded by morons, but we had such a great group of people in the whole thing. It’s funny, yeah, because you could say this is a two-dimensional commercial comedy. I feel that this is the second greatest story ever told.

SheKnows: And the first is…

SheKnows: There are a lot of rumors out there that this film is, in many ways, director Todd Phillips and Zach Galifianakis in real life… 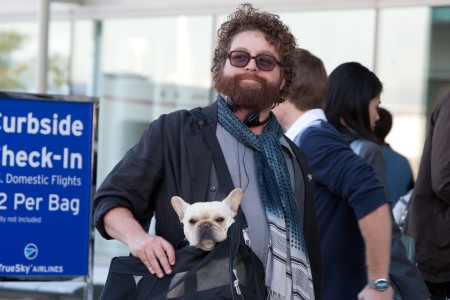 Robert Downey Jr: Well, I’m actually glad that you asked that because I think that every time I feel that I really hit critical mass and I’m in the right place is when I feel like the director and I become a third thing and that’s the character. Even though the central subject of the movie is Ethan, the person who you’re kind of seeing it through is Peter. Absolutely, and particularly when he said, “There’s just a lot of hostility and there’s a lot of fear” and his kind of attitude and his anger is covering that fear and stuff. We like to commiserate. We’re genuinely pretty happy guys but we love just getting crabby together. And he is kind of like a hostage child that we’ve taken who’s watching mom and dad or dad and dad just hash it out. I always feel like I’m playing an aspect of the director, particularly when he’s an auteur. To me, it’s a way of almost making him a proud parent. I’m a bit of an appendage of some aspect of the director.

SheKnows: Zach, your character in Due Date is a big fan of Two and a Half Men. What do you think he would make of Charlie Sheen’s latest escapades?

Zach Galifianakis: I’ve only heard a little bit about what happened to Charlie Sheen but I want to congratulate him, from what I’ve heard — be nice now that the holiday season’s coming up. But that sitcom acting is tough. You have to hit your mark. It’s a tough thing to do, the sitcom. 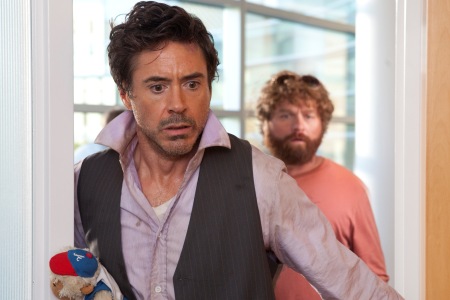 SheKnows: There are so many hilarious moments in Due Date, did either of you have trouble getting through a scene without cracking up?

Robert Downey Jr: Let me put it this way, I’m 85-times more professional than Zach, but I was hoping that we’d have some good gag reels so maybe I’d chuckle a little bit more. He might not actually know how funny he is sometimes, too.

Due Date: The meaning of friendship

SheKnows: The overriding theme in Due Date is friendship. How would each of you see that word and what does it mean to each of you? 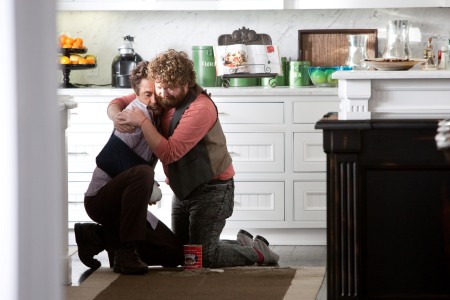 Zach Galifianakis: I think that Robert and I formed a friendship on this movie, albeit a very antagonistic but fun relationship. He’s really very, very funny and he makes fun of people a lot. For some reason, I like to be made fun of even if it has to do with my fingers not fitting in someone’s mouth. That’s really hilarious.

SheKnows: Zach, you up for a Due Date sequel?

Zach Galifianakis: As far as the franchise stuff goes, we were kind of fantasizing on the last day — and it was towards the last scene or it was the last scene at the hospital — there was a moment and I don’t know if you recall it [to Robert] where Ethan says to Peter, “Call me.” Then I’m like, “No. Call me tomorrow.” Whatever I say, we were fantasizing, like, I’ve never seen a movie jump genres. So the sequel would be more like a Cape Fear thing [laughs]. My character is not actually dumb at all. It’s just been an act.

SheKnows: Zach, do you feel your character is anything like you?

Zach Galifianakis: This Ethan guy is a lot more complicated, I think. I don’t think that Ethan Tremblay is anything like me. God, I hope not. My standup is more like how I am in real life. I don’t really do a character thing in standup. It’s just a bunch of sentences that are supposed to be funny.

SheKnows: Robert, there’s the hysterical scene in Due Date where you have that annoying child pestering you. How is it working with kids? You don’t do it too often. You actually punch the kid in the stomach and people seem to be more upset that you spit on Zach’s dog in the movie. 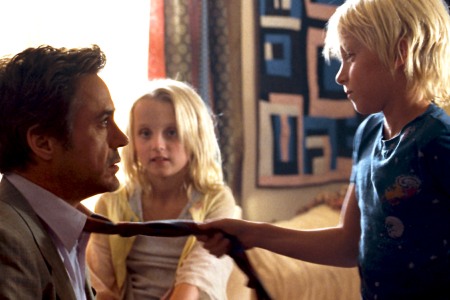 Robert Downey Jr: [Laughs] I love that we’ve actually gotten more push-back from spitting in a dog’s face than punching a human child in the stomach. Those are the two things, Todd told me to do both of them. On one of them, on the day he said, “You should spit in that dog’s face.” I was like, “Ha! Yeah, right.” He goes, “No, I want you to spit in the dog’s face!” I said, “That’s so definitive.” He then said, “I know, but I think that people like you enough.” I don’t know if they will [laughs]. Todd loves dogs and I actually don’t like dogs. So I felt kind of horrible and splendorous doing it.

SheKnows: What about you, Zach, did you have a problem with the dog spitting?

Zach Galifianakis: Well, maybe. Oh, I didn’t like the dog. But I don’t think that means it’s OK to spit on dogs — although Robert spit in my face every morning.