The drama on The Real Housewives of Beverly Hills isn’t just on the show — Kim Richards has a tragic past that is now coming to light. 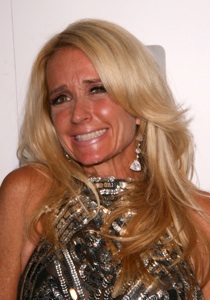 Kim Richards of the hit reality show The Real Housewives of Beverly Hills is dealing with a major life tragedy — and it isn’t just that she must walk through life with people knowing she’s related to Paris Hilton.

Richards is slowly becoming unhinged on the show, and Star Magazine found out why. Her issues from a past tragedy are still very real to this day.

Back in 1991, Richards’ fiance John Collett was gunned down on a California street in broad daylight. Richards had been on the phone with him moments before he was killed. “John’s murder was a devastating tragedy, and Kim was just torn apart,” John’s mother, Janis Collett told Star Magazine. “Poor Kim had to identify his body. It was a horrible nightmare for her. I’ve never recovered from the loss, and I don’t think Kim has either.”

Collett’s killer is serving 30 years behind bars in the murder-for-hire plot believed to stem from Collett’s alleged involvement in a $150 million telemarketing scam.