The new episode of Private Practice has Addison struggling when one of their own, Dr. Charlotte King, is brutally attacked and raped. 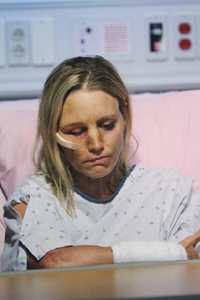 This Thursday’s Private Practice, titled Did You Hear What Happened to Charlotte King?, shows Pete (Tim Daly) finding Charlotte (KaDee Strickland) walking the halls of the hospital, bloodied and bruised.

“I don’t want anyone to see me,” she says, collapsing in Pete’s arms.

Charlotte confesses to Dr. Addison Montgomery (Kate Walsh) that she has been sexually assaulted by Lee McHenry (Nicholas Brendon). Addison must then assist with the forensic examination of her friend and colleague.

Due to violent images, viewer discretion is advised for this new episode of Private Practice, airing November 4 at 10 p.m. on ABC.

Tell us: Do you plan to watch this emotional episode of Private Practice?

Don’t miss our sneak peek of the new Private Practice.

read on for More Private Practice