In the latest episode of Grey’s Anatomy, the doctors of Seattle Grace try to get back to work as usual after the traumatic shooting six months ago.

The new episode of Grey’s Anatomy, titled These Arms of Mine, has a documentary film crew visit Seattle Grace six months after the shooting that left 11 people dead. 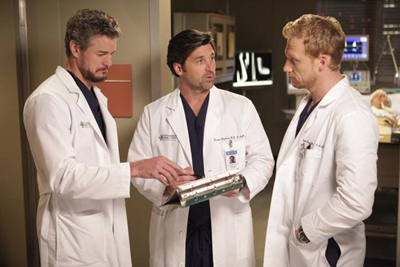 Mandy Moore reprises her role as Mary and comes back to the hospital for a routine surgery. This is the first time she has seen Bailey since the shooting, and Bailey breaks out of her normal stoic surgeon demeanor to warmly greet her. After surgery, Mary takes a turn for the worse.

Derek (Patrick Dempsey), Mark, Owen and Callie perform a rare bilateral arm transplant on a logger named Zach. The only problem? The donor arm has a tattoo that says “Nicole.” The family decides they will make Nicole “our new favorite name” and the doctors successfully attach the arm. The second arm is not as easy, as a blood clot forms. Can the doctors save the other arm?

Since saving Derek’s life during the shooting, Cristina is having a hard time adjusting to the “hero” label. “Being a hero has its price,” she says prophetically.

Is Cristina having a nervous breakdown? Will Callie and Arizona leave Seattle Grace for Africa? Tune in to watch Grey’s Anatomy Thursday at 9 p.m. on ABC.

Watch a sneak peek of the new Grey’s Anatomy: