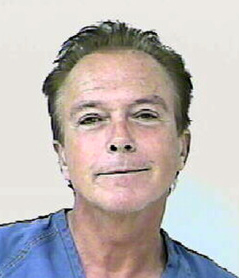 Former teen idol David Cassidy — best known for his role as Keith Partridge in the classic TV show The Partridge Family — was arrested on suspicion of DUI near Port St. Lucie, Florida.

According to cops, Fort Lauderdale resident Cassidy was driving erratically and nearly caused an accident on the Florida Turnpike. Cassidy reportedly smelled of alcohol and was pretty wobbly on his feet when cops pulled him out of the car for field sobriety tests.

What really sealed his fate, however, was the half-empty bottle of bourbon found within arm’s reach of the driver’s seat.

The aged teen dream is indignant at the accusation that he would put the public at risk. Cassidy said it went down like this: He attended an early morning funeral, so he was very tired. He had a single glass of wine at lunch, and took a pain pill for his back later in the day. As for the breath test results? Cassidy said they were bogus.

His rep told TMZ the Daydreamer will fight the charges. “He would never jeopardize anyone on the road and he would not have been driving had he not had to go to a funeral. He’s never been arrested in his life before for anything.”