The third season of Kendra promises lots of drama, as the Basketts adjust to life with a baby — and a big career move.

“I love what’s real in life, and what’s fake,” Kendra says, pointing to her ample cleavage. The third season of Kendra starts off with her fighting to re-gain her Playboy body after having a baby, as well as adjusting to big changes in the Baskett household. 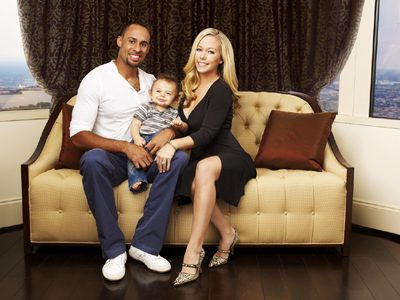 After obnoxious radio host Erich “Mancow” Muller called her a “fat, boring housewife” and told her she went from “Marilyn Monroe to Mrs. Brady,” Kendra put him in his place:

“I can still shake my ass! Moms can be sexy!”

As Kendra struggles to “do it all,” including promoting her new book, spending time with her hubby Hank Baskett and raising baby Hank — they learn that Hank has been cut from the Philadelphia Eagles. “I feel like a NFL wife!” Kendra says, in tears, after learning they may have to move to Minneapolis, as Hank has signed on with the Minnesota Vikings.

The Playboy shoot: what happened?

After working hard to lose the baby weight, Kendra decided to show off her figure in Playboy — but changed her mind at the last minute. The cameras capture the behind-the-scenes drama on why Kendra backed out at the last minute on posing for Playboy. Was she still feeling self-conscious about her post-baby figure? Or did Hank not want her to do it — especially after the infamous sex tape scandal?

Tune in to the new season of Kendra, premiering Sunday, November 7 at 10 p.m. on E!

Watch a sneak peek of the new Kendra: