It’s Gwyneth Paltrow’s turn to take a spin on the Glee wagon and the Hollywood hot mom is tackling Cee Lo Green’s bleep heavy track F**k You — but it’s not what you think. 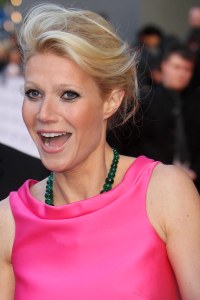 Gwyneth Paltrow has a new movie hitting theaters soon, Country Strong, and she’s getting ready to take the stage at the Country Music Awards. But that’s not all Paltrow is gearing up for on the musical front.

Gwyneth Paltrow is taking over Glee on the November 16 episode where she’ll throw down Cee Lo Green-style according to Entertainment Weekly.

It’s being reported that Paltrow will perform Cee Lo Green’s jam F**k You — with a few small changes.

Censors can take their hands off the bleep button and take a break because the song is being cleaned up for Glee and its very special guest.

The song which is busting with expletives will be revamped and named Forget You during Gwyneth Paltrow’s interpretation.

We must admit, when we heard Paltrow was taking on Cee Lo Green it was amusing to think of how the star would make it Glee friendly. Even with this latest scoop, we still can’t imagine her version. One thing is for sure, Gwyneth Paltrow’s Glee debut is definitely high on the excitement radar.

If you can’t wait to see Hollywood’s most sought after actress use her pipes on Glee’s November 16 episode, then check out Paltrow at the November 10 Country Music Awards. It will be her live singing debut where she’ll belt out Country Strong? from her latest movie which also happens to be named Country Strong.