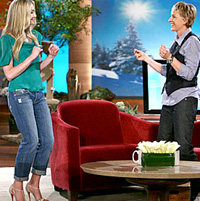 Millions of viewers tuned in to watch Ellen DeGeneres interview her wife and Better Off Ted star Portia de Rossi on their seven-month anniversary.

Before jumping into the interview (and after they danced a jig), Ellen told Portia to remove her shoes so people could see that Ellen is actually taller. “That’s the main reason I had you on the show, actually,” Ellen said, “is to settle the fact that I’m actually taller than you.”
“So, how’s married life?” Ellen asked.

“It’s going pretty well,” Portia joked. “Actually, that was the happiest day of my life.”

Then Ellen delved deeper. “I hear we are having a baby,” she said. “Is that true?”

“I heard that, too. But not that I know of,” Portia said and laughed.

The couple talked about their life together, with Portia revealing that she doesn’t really get noticed by fans when they are out together because Ellen is so famous.

Ellen also pointed out that her character in Better Off Ted is icy and insensitive, like many of the characters she plays. Portia said she is drawn to those roles because they are so different from how she is in real life.

Portia and Ellen then played the newlywed game against a heterosexual couple, answering silly questions like what kind of dog they would be reincarnated as or how old they were when they had their first kiss.
Portia is touring to promote her new book, Unbearable Lightness, in which she talks about her battle with anorexia and how at one point she weighed only 87 pounds and was eating only 300 calories a day.

Check out a clip of Portia de Rossi on Ellen here: