Taylor Swift’s third album, Speak Now, hits 1 million sales in the first week, breaking Shania Twain’s record she has held since 2002 for Up for highest sales for a female country singer. 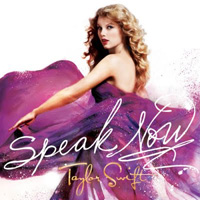 Taylor Swift has proved that writing about your ex-boyfriends can pay off — in a huge way! The 20-year-old singer has passed the music industry “magic barrier” of selling over one million records (1.044 million, to be exact) in one week. She is officially in the big leagues.

In fact, one of every five albums purchased in the past week was Speak Now.

Swift’s Speak Now album is now ranked up with other big sellers who reached the one million mark, most recently Lil Wayne in 2008 for Tha Carter III, as well as 50 Cent in 2005 for his Massacre album. No one has yet to topple Garth Brooks’ country music record of selling 1.085 million in 1998 for Double Live.

Swift’s deeply personal album, in which she writes about her ex-boyfriends, including John Mayer and Taylor Lautner, has struck a chord with many fans. Her new rumored boyfriend, Jake Gyllenhaal, better watch out!

“A lot of times when people’s relationships end, they write an e-mail to that person and say everything that they wish they would have said. A lot of times they don’t push send. This was a tough one to write,” she told People about her song, Dear John (rumored to be about John Mayer), “and I guess putting it on the album was pushing send.”

read on for More Taylor Swift

5 hrs ago
by Rosalind Moran