Michael Jackson’s mom, Katherine, will talk about her son, Michael Jackson, as well as her wrongful death lawsuit on Oprah next week.

Leave it to Oprah to get all the good interviews! The queen of daytime television will talk with Michael Jackson’s mom, Katherine, in an in-depth interview on November 8 on The Oprah Winfrey Show. 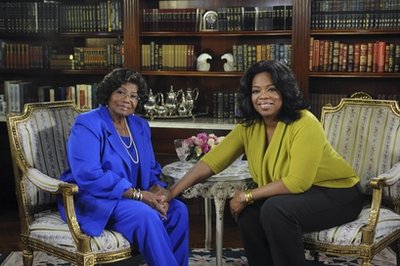 Michael‘s father, Joe Jackson, will also appear in the interview during the segment in which the Jackson family is having a backyard get-together at their Encino, California home.

Katherine will reportedly discuss her son’s unexpected death in 2009, as well as his life growing up as a child superstar. She will also dish about her wrongful death civil lawsuit against AEG, and her battle to control Michael’s estate and his millions. Sounds juicy!

There are also reports that Michael’s three children will be present during the interview — and producers are trying to get mom Debbie Rowe on board also.

Who will not be there? X17 is saying that Randy Jackson was not invited to the interview because they thought he would try to stop it. No word on whether Janet Jackson or LaToya Jackson will make an appearance.

Oprah recorded over three hours of material during her visit, and Monday’s interview will air only one hour of it. I’m sure if the ratings are big enough, we can expect a part two.

More on the Jackson family:

4 mins ago
by Louisa Ballhaus