Ryan Seacrest announced that the New Kids on the Block and the Backstreet Boys will embark on a North American tour in 2011. Get all the details on the collaboration here!

Our inner 13-year-old girl is exploding with excitement right now. 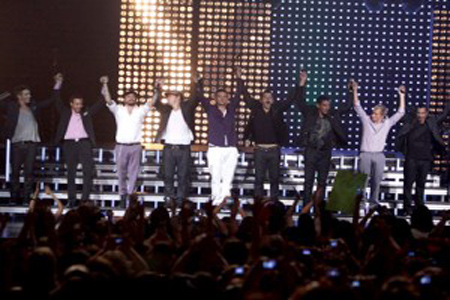 Why? No, it’s not because of Justin Bieber. Ryan Seacrest announced this morning that the original boy wonders — the New Kids on the Block and The Backstreet Boys — are teaming up for a North American tour next year.

Excuse us while we compose ourselves.

The nine guys first ignited rumors of a co-headlining tour after NKOTB surprised fans at a summer Backstreet Boys concert at Radio City Music Hall in New York City. The groups teamed up to perform the BsB hit I Want It That Way to throngs of screaming twenty- and thirtysomethings.

Details on the joint tour – cities, dates and ticket prices – will be announced at a later time. We do know that the tour will feature nine guys, meaning former BsB member Kevin Richardson is still clinging to his retirement.

Be sure to tune in to the American Music Awards on Nov. 21 if you can’t wait until next year to experience the BsB/NKOTB experience. The two groups are set to perform together during the ceremony. No word on what they’re performing, but we hope it’s an amazing mashup of their combined greatest hits.

Both groups enjoyed monumental success during their heydays, and both are still touring tirelessly to try and recapture their glory days. Will this joint tour reignite the fan flames, or will it fizzle out? Weigh in!