Grey’s Anatomy dropped a doozy of a twist in last week’s documentary-style episode, leaving everyone wondering: Will Callie and Arizona really move to Africa? They might, but if so, it won’t keep us from seeing them.

In the October 28 episode of Grey’s Anatomy titled These Arms of Mine, it was revealed that Arizona had landed a prestigious grant and would bring her pediatric skills to Africa. Callie was up in arms over the turn of events, insisting she would never leave her girlfriend for a career opportunity, no matter how great. 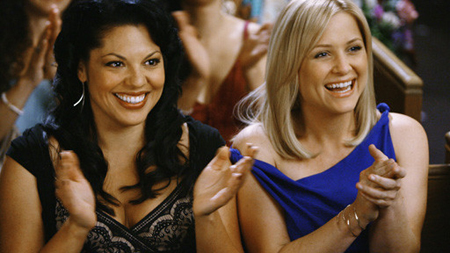 Arizona and Callie settled things, however, with Callie packing to join Arizona on her great adventure.

Couched in the documentary-style episode, there were no big moments, but the news that the lesbian couple might ship out and leave Grey’s Anatomy for good had fans all in a twitter.

One anxious fan even reached out to showrunner Shonda Rhimes directly, via Twitter, asking when Callie and Arizona will be back.

With Jessica Capshaw out on maternity, we’ll surely be seeing less of Calzona, but never fear, Callie and Arizona are not gone for good.

Teasers seem to indicate we’ll see tons of Callie throughout November sweeps. It sounds like she may surprise her colleagues by showing up in town during episode nine and according to E! Online, she should be back in rotation at the hospital by episode ten.

Callie may even have a flirty moment with McSteamy (Eric Dane) in this week’s November 4 episode, That’s Me Trying, but those two are always flirty, so SheKnows isn’t worried about that. How the couple handles their separation while Capshaw is on leave and Callie is away, however, is another matter.

This Thursday’s Grey’s Anatomy will also see Owen put the residents through an intense trauma certification drill, while Cristina finally has the big breakdown she’s been heading for. She’ll even lash out at her twisted sister, Meredith, but never fear, Cristina will be back to her old self, eventually.

“She’s coming back and how she comes back ROCKS,” Rhimes tweeted.

That’s Me Trying airs Thursday at 9 pm, with a guest appearance from Buffy the Vampire Slayer alum Amber Benson. Mandy Moore and Ryan Devlin will also return as the now comatose and failing Mary and her hubby, Bill.