Looks like ABC Family is getting ready to give Sandra Bullock and Nicole Kidman a makeover — or at least one of their classic movies, that is. Be on the lookout for some Practical Magic coming straight to the small screen.

The Hollywood Reporter first scared up the news that ABC Family is mulling around a TV adaptation of Sandra Bullock and Nicole Kidman’s 1998 classic feature, Practical Magic. With all the supernatural shows popping up highlighting the haunting tales of things that go bump in the night, is there room for one more? 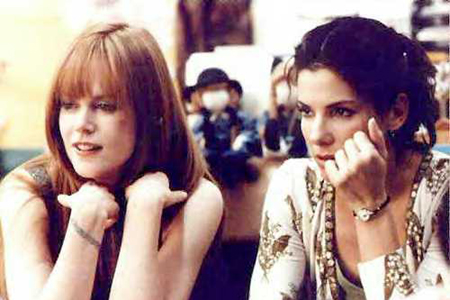 If you don’t already know, Practical Magic is the bewitching story of the young Owen sisters and their nieces. The family of witches is destined to forgo true love, and if any should find it, the man dies a heartbreaking death.

The TV adaptation of Practical Magic is reportedly still in early development, but we do know it’s based on the novel by Alice Hoffman.

If the success of the 1998 film version of Practical Magic is any indication of how the TV version will fare, ABC Family could have a spellbinding following on their hands.

The film took in a respectable $46 million at the box office.

Do We Need More Magic On Our TVs?

Love destined to suffer due to a family curse sounds like a perfect way to get lost in TV during a hypothetical Thursday night, right? Of course it does. Everyone is a sucker for forbidden love these days. Is there too much supernatural meets human destiny going on, however? Or can we muster up the excitement to add one more show to our already stuffed DVRs?

The CW network put its stamp on spooky TV with successful shows like The Vampire Diaries and Supernatural, capitalizing on the monumental interest the big screen brought in with The Twilight Saga.

Can the star-crossed love and quirky happenings of a few witch sisters and their lineage stand up to the sexy sizzle of vamp sex or even the tall order of Smallville? It’s tricky, but with the right cast it could.

Current shows bringing in success of the monster kind seem to have a formula Practical Magic might veer from if I’m correct — a hot cast and even steamier romances. To set themselves apart, ABC Family might go the traditional route of the wholesome family with a secret and keep the story intact the way it was intended — at least that might be the best way to make room for the adaptation. Trying to bring the Owen sisters into a more modern day tale might lose the effect that made the film version so special. Their dark and tormented souls were a completely different kind of story than something on TV today, so this could be a great fix for something new.

Do you think there’s room for more supernatural shows on your TV? Tell us, we want to know.