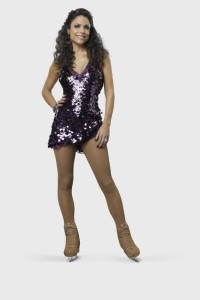 If you thought seeing your favorite stars fumble around the ballroom floor all in the name of a Disco Ball trophy was entertaining, just wait until they slap on some ice skates and tackle a quad.

On November 22, don’t change your dial after watching Dancing With the Stars or you’re in jeopardy of missing the biggest train wreck to hit the small screen since Kate Gosselin tackled the paso doble. Skating With the Stars has landed.

Skating with the Stars: The Cast

ABC revealed the stellar and diverse all-star cast during Dancing With the Stars’ results show and you might be shocked to see who made the ice.

Bravo star of Bethenny Getting Married? and one-time cast mate on The Real Housewives of New York Bethenny Frankel will put down her Skinny Girl Margarita long enough to lace up some skates and take on gold-medal-winning Olympic skier, Jonny Moseley.

If a housewife and an Olympic champion aren’t enough to keep you watching, try indulging in the efforts of soap star Rebecca Budig or Disney-raised actor and entertainer, Brandon Mychal Smith. Film and TV actress Sean Young will try to reign as the queen of the ice — but don’t count out legendary rocker and Motley Crue frontman, Vince Neil.

skating with the stars: The Timing

What better way to gain ratings than to force a celebrity to take on a skilled sport that also could lead to another favorite past-time of the American public — watching people fall on their behinds.

Tune in November 22 for the debut of Skating With the Stars.

Who do you want to see skate circles around the competition?