Dancing With the Stars continued its 200th episode celebration with a jam-packed results show featuring Taylor Swift, Rod Stewart, goofy cast awards and of course heartbreak as Rick Fox was sent home. Also, Bristol Palin either has nine lives or a lot of fans — we haven’t decided yet. 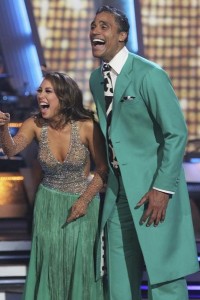 Dancing With the Stars took a break, albeit small, to keep the 200th episode festivities moving with big performances by Taylor Swift and the king of cool, Rod Stewart. But the fun had to end sometime, as it all came down to your votes in the end — someone had to go home.

Dancing with the Stars: The Top and Bottom three

This week’s competition featured the group round and an intense individual dance of seasons past that left Jennifer Grey and Brandy at the top of the leader board. Did your votes keep them there?

The first dynamic dancing duo to claim a spot in next week’s competition was Brandy and Maks Chmerkovskiy. No surprise there. The couple seems to have found a common ground to make them gel together — I think that common ground might be winning. Maks Chmerkovskiy has visited the finals more times than I can remember and wants it just as bad as his R&B-singing partner, Brandy.

Unfortunately, Bristol Palin and Mark Ballas were left hanging in the balance as they were the first couple sent to wait it out in jeopardy land.

Dancing With the Stars decided to break the tension and carry on with more of its 200th show celebration by handing out some bizarre awards from over the past seasons, like most transformed male dancer. The honor went to the former ponytail-wearing, Fabio-esque, Louis Van Amstel.

The next couple to join Brandy and Maks in the safe-zone of the ballroom competition was Kurt Warner and Anna Trebunskaya. They lived to dance another week. Not so lucky were Kyle Massey and Lacey Schwimmer. As always, Kyle Massey grinned and beared it while heading to await his fate in jeopardy.

Dancing with the Stars: The Results

The bottom three — Bristol Palin and Mark Ballas, Kyle Massey and Lacey Schwimmer, Rick Fox and Cheryl Burke — were brought out to the white hot spotlight to face the music.

Bristol Palin and Mark Ballas were the first lucky dancers to be sent away to prepare for another week. Next up, Kyle Massey and Lacey Schwimmer got a boost from the voters, sending home the sexy Rick Fox and fantastic Cheryl Burke. Rick Fox had a terrific week and his scores were high, leaving many scratching their heads.

Check out next week’s Dancing With the Stars as the remaining five contestants take on instant dances. I know, I can’t wait to see what that means too.