Cher sat down with Vanity Fair and talked about Sonny Bono, aging, Sarah Palin and her child Chaz.

Cher, star of the upcoming Burlesque, is her usual open self in her new interview with Vanity Fair, talking with a total lack of discretion about Sonny, aging, her child Chaz and Sarah Palin. It’s hilarious. 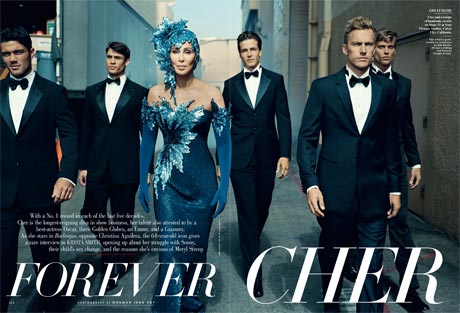 On transgendered child Chaz Bono: “If I woke up tomorrow in a guy’s body, I would just kick and scream and cry and (expletive) rob a bank, because I cannot see myself as anything but who I am — a girl. I would not take it as well as Chaz has. I couldn’t imagine it. She’s a very smart girl-boy! This is where I get into trouble. My pronouns are (expletive). I still don’t remember to call her ‘him.'”

On Sonny: “Sonny told me when we were together, ‘One day you are going to leave me. You are going to go on and do great things.’ I wouldn’t have left him if he hadn’t had such a tight grip, such a tight grip. [He treated me] more like a golden goose than like his wife. I forgive him, I think. He hurt me in so many ways, but there was something. He was so much more than a husband — a terrible husband, but a great mentor, a great teacher. If he had agreed to just disband Cher Enterprises and start all over again, I would have never ever left. Just split it down the middle, 50-50.”

On aging: “I think Meryl [Streep] is doing it great. The stupid (expletive) is doing it better than all of us! But I don’t like it. It’s getting in my way. I have a job to do, and it’s making my job harder…”

On Sarah Palin: “I got so obsessed with [C-SPAN] that it was kind of interfering with my life. Sarah Palin came on, and I thought, Oh, (expletive), this is the end. Because a dumb woman is a dumb woman.”

The interview appears in the December issue of Vanity Fair and hits newsstands November 9.