As Emma Watson accrued money for her part in the Harry Potter series, her parents kept it real, only doling out an allowance of around $75 a week. Blown away by news that she’s actually worth millions, Watson managed to keep her wits about her. Parents of American starlets, don’t miss this story! 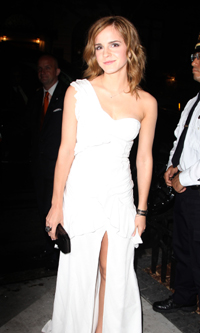 Growing up with money to burn in Hollywood has had tough consequences for starlets like Lindsay Lohan, but life for young millionaire Emma Watson has been very different. Vanity Fair recently dubbed Watson the highest paid actress in Hollywood, but for years, Watson simply had no idea what she was worth.

Parents kept her on strict budget

The 20-year-old British actress has been playing Hermione since she was nine, but was only paid around $75 a week until she turned 17 or 18. Then she had “the money conversation” with her father and learned her part in Harry Potter had earned her around $32 million!

According to reports, Harry Potter‘s leading man Daniel Radcliffe is worth $45 million, which is a few cents more than both Prince William and Harry. Harry Potter scribe J.K. Rowling is said to be wealthier than Queen Elizabeth II, herself.

“By the third or fourth film, the money was starting to get serious,” Watson tells British Vogue. “I had no idea. I felt sick, very emotional.”

Emma wants to be normal

The self-professed “straight and boring” Brown University sophomore didn’t go out and splurge on fancy housing or diamond jewels. She instead enrolled in a money management course at Coutts and now lives with the riff-raff in college housing. Watson just wants to be a normal student.

Though tidbits from Watson’s December cover story in British Vogue have flooded the news circuit, it’s possible she hasn’t seen any of it. She abides by a self-inflicted ban on reading tabloids.

“It became weirdly addictive,” Watson admitted. “There’s tons that’s not very nice and I’m very, very self critical, so it was like a drug for me. I focused on the negative stuff, so I stopped.”

Why she cut her hair

There are two more installments of the Harry Potter franchise to hit theaters, but Watson’s part in both films is already in the can, so she celebrated her freedom with an adorable pixie cut.

“For the nine years I was on Harry Potter, I was contractually obliged not to cut my hair, not to tan. All the normal things girls do, I couldn’t,” she explained. “So when I got the chance to change my appearance, this is what I did.”

Harry Potter and the Deathly Hallows – Part 1 is set to hit theaters November 19.