It’s been too long since a really great comedy landed in theaters, which is why we are so excited for Due Date.

Due Date reunites Zach Galifianakis with his Hangover director, Todd Phillips, and has him going mano a mano with Robert Downey Jr., perhaps the greatest comedic actor of his generation. In the film, Downey plays a high-strung father-to-be forced to hitch a ride across the country with a train wreck of an aspiring actor (Galifianakis) in order to make it to his child’s birth on time. 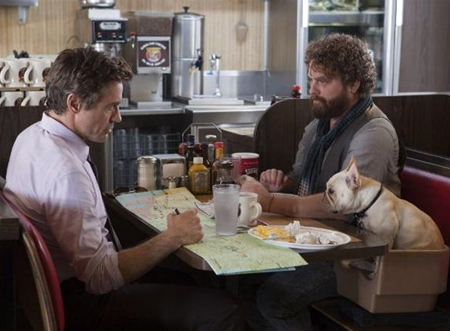 Looking over Phillips, Galifianakis and Downey’s cumulative bodies of work, you realize these men are responsible for some of the funniest moments in recent film history.

The duo should make an arresting pair of comic actors in a story plot that is right in both actors’ wheelhouses.

Downey is trying to get home to see the birth of his first child. After running into Galifianakis at the Atlanta airport, things don’t go quite as planned. Galifianakis’ character is heading to Los Angeles to pursue his dream of being an actor. His father has just died and it was Galifianakis’ father’s dream to have him make it in Hollywood.

Downey’s considerable effervescent talents and sharp wit are on full display and we already know that Galifianakis can bring the funny. The question is: Will audiences buy these two together?

Since the film was announced, it’s been compared to Planes, Trains and Automobiles with its idea of two polar opposites hitting the road. Will the film mirror Steve Martin and John Candy’s successful vehicle (no pun intended!) or fall into the movie lexicon alongside other failed road trip movies that missed the mark? Stay tuned! We have your review on November 5.

read on for More Due Date