Oprah has unveiled her OWN schedule. No, we’re not screaming at you with our caps locked; OWN stands for the Oprah Winfrey Network and it begins broadcasting at noon on January 1, 2011. (That’s 1/1/11 for those of you who like symbolism or numerology.) 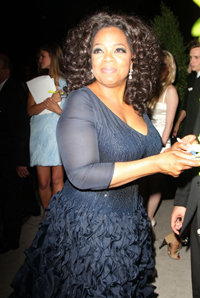 While many fans have been mourning the end of Oprah as we’ve known her for the last twenty-five seasons her talk show has been on the air, with OWN, you can have all the Oprah you can handle, 24/7. It’ll be your new favorite thiiiiing!

Here’s a preview of a few shows you can set a season pass for or tune in to morning, noon and night:

An inside look at oft-troubled mother and daughter duo Naomi and Wynonna Judd as they prepare for their first tour together in ten years. Here come the claws, the tears, and some industrial sized cans of Aquanet.

Ryan and Tatum: The O’Neals:

Not to be outdone in the dysfunctional family category, the O’Neals make the Judds look like a Norman Rockwell portrait of normalcy. This father and daughter, who were picture perfect when they starred together in Paper Moon, have both had very public substance abuse struggles and their crumbling relationship hit the front page (yet again) after the funeral of Ryan’s wife, Farrah Fawcett, when he tried to kiss his daughter on the mouth because he supposedly mistook her for someone else. Ew! The show will follow them as they “reclaim their relationship after being estranged for over 25 years.”

Why Not? With Shania Twain:

Chronicling the country singer as she “begins her climb back to the top, a personal journey filled with risk, revelations and unexpected adventures,” it will be Shania Twain’s first time on camera since her marriage to Robert “Mutt” Lange fell apart in May 2008 after he was caught cheating on his wife with her then-friend and employee, Marie-Anne Thiebaud.

Are you noticing a theme with these shows?

Oprah regulars Dr. Oz, Dr. Phil and Suze Orman will contribute to Ask Oprah’s All-Stars and O’s best girl, Gayle King, will have her own show, aptly titled The Gayle King Show, which we assume will be a low-rent version of Oprah’s gab-fest as it was in the early years when her main competition was Phil Donahue.

Of all OWN’s offerings, the only show that truly intrigues us is Your OWN Show: Oprah’s Search For The Next TV Star. Watching Oprah put hopefuls through their paces Tyra Banks-style will be tantalizing viewing.

Tell us: Will you watch the Oprah Winfrey Network?