Demi Lovato’s rehab stint is a result of her eating disorder and being a cutter, sources close to the star’s family reveal. 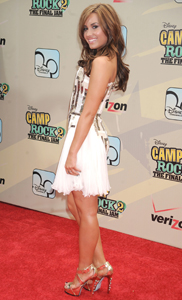 yesterday for unspecified “emotional and physical issues,” according to her rep, but old rumors of cutting and an eating disorder have already come back to haunt the Disney star.

Demi was photographed multiple times in 2008 with what looked like deep cut marks on her wrists. At the time, her publicist denied the cutting rumors.

“Demi was wearing gummy bracelets just prior to her appearance on the red carpet and, because of how tight they were, they left indentations on her wrist,” her publicist Allison Leslie said. “These allegations are completely false.”

However, a family friend talked to People magazine about Demi’s real troubles. “She fought through eating disorders and has struggled with cutting. [She] is taking control by getting help.”

“She definitely had body-image issues,” the friend continued. “She was always conscious of her weight.”

“Like many other teenage girls, she struggled a lot to fit in and find acceptance,” says another source. “She’s very sensitive, very intuitive and that is part of what makes her a wonderful performer — very talented. It is a double-edged sword. I think she felt that the hard time she had [in school], problems with kids who were incredibly vicious made her stronger. But none of us feels strong every day.”

Lovato briefly touched on her troubles in an interview with People over the summer. She said, “Feeling comfortable in your clothes is something I deal with to this day. I wish I had somebody I had to look up to when I was younger to stand up and say, ‘Hey, I have fat days.’ So I want to be able to start a foundation or something that’s for girls feeling confident, to empower them.”

The 18-year-old pulled out of her scheduled world tour with the Jonas Brothers. There is so far no indication how long she will be gone.