There is no such thing as keeping anything a secret for too long in Hollywood. Especially if you’re a hot, young, high-profile couple like Kellan Lutz and AnnaLynne McCord. Actually, according to reports the couple is no longer a couple. 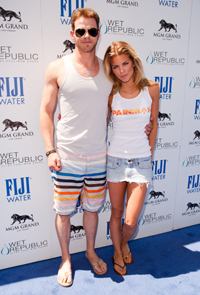 According to E! Online, McCord and Lutz are no longer kicking it as Hollywood’s “it” couple. The 90210 actress and Twilight star are on the outs.

AnnaLynne broke it off

According to the report, it was AnnaLynne McCord who sent her hunky beau Kellan Lutz packing.

An insider revealed, “She broke up with him. He wasn’t a good boyfriend.”

Why is it always the hot guys?

The gossip patrol is working overtime and claims are alleging Lutz shared a moment with a girl that wasn’t AnnaLynne McCord over New Year’s Eve.

Though she reportedly mustered up forgiveness, Lutz stepped out of line again by allegedly not falling at her feet on her birthday, July 16.

The source said, “He showed up at her house with flowers and took her to dinner, but that was it. No gift.”

Oh, the troubled romances of stars and their starlets. When will they get it right?

Kellan Lutz and AnnaLynne McCord often played coy about their relationship, but the two were snapped at the red carpet premiere of The Twilight Saga: Eclipse, leading everyone to believe they were ready to be out and proud as Tinseltown’s latest and greatest duo. Maybe that was their first mistake. Sometimes red carpet debuts can spell disaster.

Best of luck to them both.

More on AnnaLynne and Kellan: