The 200th episode of Dancing With the Stars brought out past competitors from all 11 seasons. Even with all the fun, it was time to get down to business with the team competition and individual dances.

Dancing With the Stars celebrated its 200th episode by opening with a familiar song from the very first episode — Beyonce’s Crazy in Love! 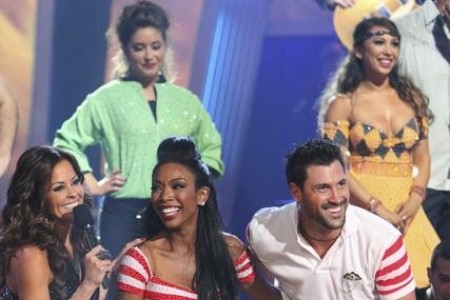 The 200th episode of Dancing With the Stars was the toughest yet in the competition for the mirrorball trophy. Not only were the dancers judged by competitors and stars from the past seasons, but the team competition put an added stress to the evening’s scores. Here’s how the scoring went down. The dancers competed in the group competition led by two past stars to produce an overall score to be added to their individual scores later in the evening.

Once again it was Brandy’s night as she shined in the group competition and took charge with an individual fox trot that sizzled with passion.

Jennifer Grey has been slipping as of late but she managed to go dance-for-dance with Brandy by performing the tango of a lifetime with Derek Hough. The two wound up in a two-way tie on the leader board.

Let’s see how the rest of the night fared.

One would think Apolo Anton Ohno would have the upper hand but never count out the underdog.

Team Kristi danced the cha cha to a funky groove that left Len Goodman feeling the underdogs gave quite a bite. Rick Fox and Cheryl Burke were the highlight of the Michael Jackson-infused cha cha cha exuding a smooth heat, but Bristol Palin was a bit of a let-down with messy steps.

Team Apolo danced their own hot cha cha inspired by Ohno’s freestyle dance from season four. They were cha cha cha-tastic! The whole team really pulled through with tight and sharp moves. The formation according to Len Goodman was perfect. Brandy and Jennifer Grey proved slinky and sexy in their solos. Not one link was missing from team Apolo. 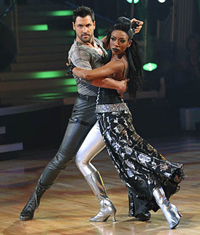 In the individual dance round, each competitor interpreted an iconic dance from a past season to be judged by the original star who danced it.
Kyle Massey and Lacey Schwimmer

Mel B returned to judge Kyle Massey and Lacey Schwimmer on their interpretation of her paso doble from season five. Kyle Massey had to pull out his inner sexy to pull this one off and Mel B was blown away. The little bundle of energy attacked every step and it was deemed his best dance by Len Goodman. He went from goofy to yummy in one night.

Season three champion Emmitt Smith took the floor to judge Kurt Warner and Anna Trebunskaya on their take of his memorable tango. Kurt Warner tries really hard each week and this week it finally paid off. He brought to life a great character for the tango. He was suave and his technique finally matched the drama of the routine. As Bruno said, “You went from mission impossible to mission accomplished!”

Kelly Osbourne made her triumphant return to judge Bristol Palin and Mark Ballas’ Viennese waltz that she once executed magnificently. Bristol Palin was a bit detached from the performance but her moves and technique were clean. Kelly Osbourne and Bruno agreed that she moved beautifully. Week after week this girl gets grilled for her performance or lack thereof and I don’t think it’s warranted. She did well.

Helio Castroneves judged Rick Fox and Cheryl Burke’s version of his famous quick step and it was on fire! It was quick like it should be, but also clean. Rick Fox gave his best performance to date and wore the brightest green suit while doing it.

Season eight runner-up Gilles Marini came back to judge his fox trot interpreted by Brandy and Maks Chmerkovskiy. Brandy has been topping the leader board as of late and she once again took charge on this dance. She channeled her inner sex kitten that left heat all over the dance floor. The judges, including Gilles Marini, agreed that every step oozed sensual purpose and technique.

Jennifer Grey and Derek Hough danced a tango a la former champion Drew Lachey. Jennifer Grey has been slipping week after week and she channeled that frustration into a fiery tango. It was good and she did make quite the comeback with crisp and flawless technique, but she looked and felt angry. I enjoy an intense tango, but not that intense.

Dancing With the Stars Scores:

Check out the elimination Tuesday night when Taylor Swift and Rod Stewart will be the musical guests!