The Walking Dead premiere was the most-watched show ever on AMC.

HBO used to be cable’s go-to channel for the best programming. They even had the slogan, “It’s not TV. It’s HBO.”

These days, it seems like cable’s newest tagline should be, “It’s not HBO. It’s AMC.” 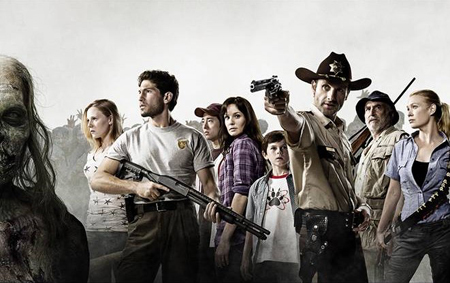 Thanks to the outstanding shows Mad Men and Breaking Bad, AMC has gained major street cred while establishing a devoted following for their original programming. With the premiere of Rubicon earlier this year, the network, once known for playing black and white oldies, proved the success of their shows was no fluke. Last night, The Walking Dead premiered to AMC’s largest audience, 5.3 million viewers, which is the biggest cable premiere of 2010, making it a bona fide hit out of the gate.

Based on the black and white Image Comics series created by writer Robert Kirkman and artist Tony Moore, the graphic novels chronicle a group of people trying to survive in a world overrun by a zombie apocalypse.

Oscar nominee Frank Darabont, who previously wrote and directed The Green Mile and The Shawshank Redemption, developed the show for AMC and serves as its executive producer. Andrew Lincoln, who won our hearts as Mark in Love Actually, stars as Rick Grimes, the leader of a small group of survivors traveling across the United States in search of a new home away from the growing hordes of zombies.

In a statement, AMC President Charlie Collier said, “It’s a good day to be dead. We are so proud of this show, its depth of storytelling and the remarkable talent attached. As the network dedicated to bringing viewers the best stories on television, we are so pleased to have the opportunity with The Walking Dead to raise the bar within this popular genre and continue our commitment to being the home of premium television on basic cable.”

“The Walking Dead is that rare piece of programming that works on so many levels,” said AMC SVP of original programming Joel Stillerman. “It is legitimately great storytelling that is not only highly entertaining, but incredibly thought provoking as well. People who are familiar with the comic books know what’s coming, but suffice it to say, this is only the beginning of a long, intense, and powerful ride. Long live The Walking Dead.”

Usually, that kind of back patting from a network is unwarranted but in this show’s case, they deserve all the praise they’re receiving, even when it is self-congratulatory.

Video: Watch the trailer for The Walking Dead