Zach Galifianakis has “sparked” big controversy over his appearance on HBO’s Real Time with Bill Maher this weekend. 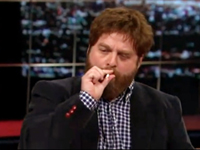 While discussing Prop 19, a measure on the California ballot in tomorrow’s election which would make marijuana legal in the already bud-friendly state, the comedian, whose new film Due Date opens on Friday, said, “It’s a tricky thing politically to jump on that bandwagon because I think that maybe people still see it as taboo.”

To prove his point, he pulled out a joint, lit it and offered to puff puff pass it around the table.

Zach sparks one up

Promoting whistles, whoops and applause from the audience, Zach passed the dutch to the left hand side to Margaret Hoover, a conservative talk show host, who was laughing hysterically as if she were already stoned. She sniffed it, nodded and said, “It’s real.”

Hey, if you’re so conservative, Maggie, how do you know what weed smells like?

Maher, unfazed, continued the debate, while Zach‘s fellow panelists giggled and blushed until Galifianakis erupted with a joke, saying, “Oh my god! Look at those dragons!” before settling back down and saying, “That’s my point, that’s what people think of it.”

Whether or not the joint Zach puffed on was real or fake, his Cheech and Chong-ish performance has caused quite the stir which is likely exactly what he had in mind.

The panel was discussing the issue of marijuana legalization and Zach brought a ton of attention to the ballot measure, for good or bad, with his public display, one that surely made Snoop Dogg, Michael Phelps and the Marley family quite proud.