Charlie Sheen has filed for divorce from Brooke Mueller. 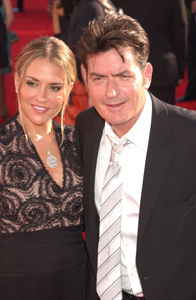 Charlie Sheen is definitely not planning to die this week — he’ll be too busy with his divorce lawyers. The Two and a Half Men star filed for divorce from Brooke Mueller today.

The couple’s tumultuous marriage began in 2008 and nearly came to an end last Christmas, when Charlie was accused of holding a knife to Brooke’s throat and threatening to kill her. He pleaded guilty to the charges and is currently on probation.

At the time, no public statement came from the couple about the status of their marriage, and while divorce paperwork was prepared back in May just in case, none was filed.

While many wondered why Brooke stayed with Charlie even after his alleged drug-and-hooker hotel rampage last week, TMZ got a scoop on video when she admitted the couple was separated.

Brooke stands to make out pretty nicely in a divorce — she will get just about the same deal as Charlie’s ex Denise Richards. In fact, the couple’s prenup specified she not get a penny less in child support than Charlie’s ex!

Brooke and Charlie have twin boys together. Charlie also has two girls with Richards and an adult daughter from a previous relationship.