Robert Downey Jr. and Zach Galifianakis join forces with The Hangover team for a raucous Odd Couple road trip in Due Date. The movie and the mayhem hit theaters Friday, but what’s Due Date all about? 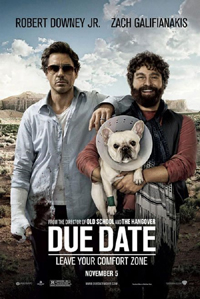 “It’s a simple idea — two mismatched guys forced to go on a road trip together,” Due Date producer/director/co-writer Todd Phillips sets up. “Robert Downey Jr. is Peter, an architect on his way back to L.A. He’s on a tight schedule because his wife is expecting their first child and the date is set. Everything is fine until he gets tangled up at the airport with a wannabe actor named Ethan.”

Peter has five days to get home, but thanks to his new “pal” Ethan, he finds himself on the No Fly list, with no cash, ID or credit cards to get there. Needless to say, Peter doesn’t take this turn of events well, especially when he realizes hitching a ride with exasperating Ethan is his only way home.

“If there really was somebody like Ethan around, he’d have been strangled in his sleep long ago,” Downey previews. “He’s like a laser beam that focuses on the one thing that will drive you crazy the most, the kind of guy who will eat a whole plate of waffles before mentioning he’s allergic to waffles. I’m sure a lot of people know someone like this, someone who is perfectly wired to activate all of their irritation buttons.” 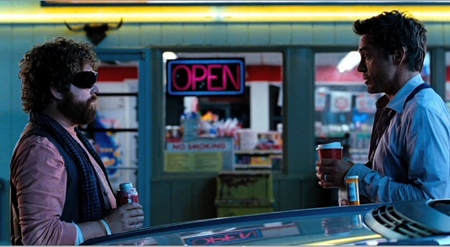 Galifianakis in Due Date

After Zach Galifianakis‘ run in The Hangover, it’s not hard to imagine how annoying things can get, but uptight Peter also has more than his share of buttons.

“He’s kind of an edgy, controlling, judgmental guy with some anger-management issues — and who better to help him explore those issues than Ethan Tremblay?” Downey says. “High-strung as he is normally, Peter is now facing the birth of his first child and is thrown into this nightmare, so it’s all amped up.”

A true magnet for trouble, Ethan takes Peter through a maze of mishaps. Peter is thrust way out of his comfort zone, but if he can survive the multi-vehicle freeway chase, the car flip and the shoot-out, the trip may turn out to be just what he needs.

“No matter where we are in Due Date, no matter what kind of chaos they’re going through, it all comes down to these two guys working out their issues,” Phillips said.

Due Date also stars Michelle Monaghan, Juliette Lewis and Jamie Foxx and comes from the team behind The Hangover and Road Trip. While Downey recently joked about signing on for a cameo in The Hangover 2, however, it doesn’t sound like that’s actually in the works.

Watch the Due Date trailer here: