Shape magazine editor-in-chief Valerie Latona made a statement saying her leaked letter, in which she reportedly called LeAnn Rimes a “husband stealer” was taken out of context. 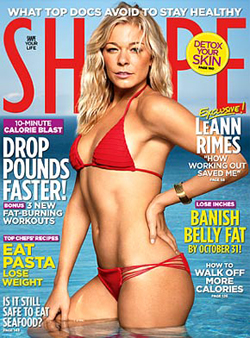 LeAnn Rimes’ third cover for Shape magazine showed her wearing a skimpy red bikini and in the interview she revealed more than just her abs. She talked about her affair with her married co-star, Eddie Cibrian, in which they both left their spouses to be together.

In response to subscribers who were outraged about the fact that Rimes was featured, Shape editor-in-chief Valerie Latona sent an email that said, “You are all in good company… as you all agree Shape has made a terrible mistake in putting LeAnn Rimes on the cover. Please know that our putting her on the cover was not meant to put a husband-stealer on a pedestal… “

Rimes quickly tweeted to her fans:

“Just so all my fans know, I’m getting to the bottom of this. It’s the first I’ve heard of this. Shape is throwing me a party next week as a thank you and a congrats for being on their cover for the third time. I find this very contradictory.” She also posted a twit pic of the Shape party invitation.

Latona followed up with a new statement, saying that only 40 readers out of 6 million complained and she sent those readers a response.

“I don’t want anyone to be unhappy — so I took the time to write a personal note to them, apologizing for not having someone on the cover they wanted to see and hoping to do right by them the next time,” she wrote. “The bottom line is this: I stand by the fact that LeAnn’s story is compelling — and her courage and strength in the face of so much adversity is compelling. That is why I put her on the cover of Shape for what is now the third time.”

read on for More LeAnn Rimes